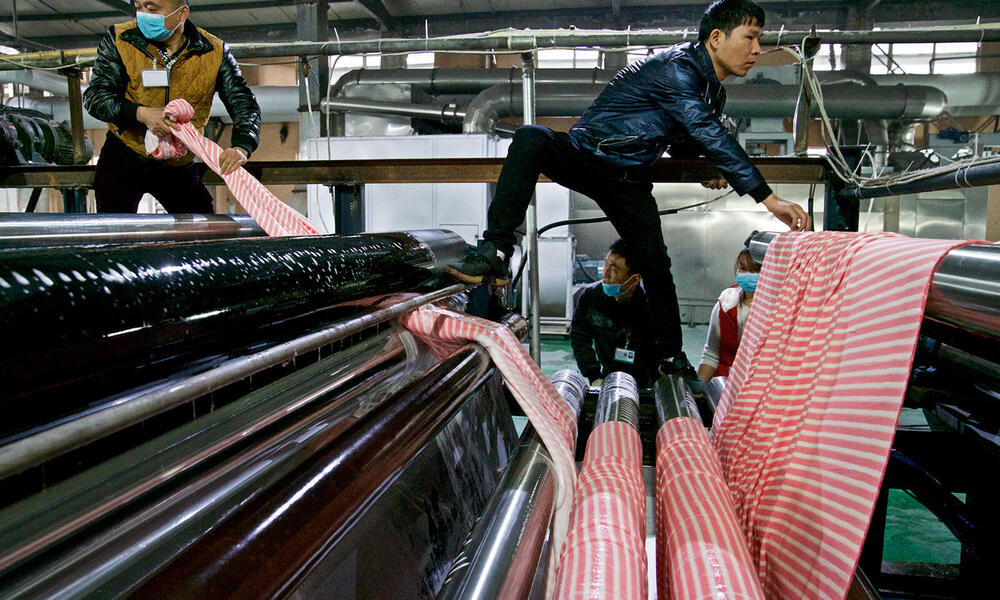 A single T-shirt takes 700 gallons of water to produce; a pair of jeans, 1,200 gallons. According to the World Bank, the textile and dyeing industry contributes to 20% of the world’s water pollution.

China produces a large share of the world’s textiles, both benefitting economically and bearing the brunt of environmental damage. Take, for example, the Changzhou Weile Dyeing Company, located in one of the many industrial parks scattered near Tai Hu Lake in the booming Yangtze River Delta near Shanghai.

Weile, run by brothers Song Lingyong and Song Lingyan, supplies textiles to 40 countries, including the US, where Costco is a main client. Until recently, the factory was emitting putrid water and toxic gases into a region where ecology is already severely damaged by industry.

“I thought, if we can transform our dyeing factory to emit clean air and make money at the same time, would it not be possible to inspire our whole industry?” says Song Lingyan.

In 2014, Weile became the first textile company in the world to adhere to the Alliance for Water Stewardship (AWS) Standard, an international standard co-founded by WWF to promote the use of fresh water in a way that is socially equitable, environmentally sustainable, and economically beneficial.

“With the tools developed by WWF and partners, the companies and industrial parks are able to become real water stewards with global and local impact,” says Wang Qian, acting director for WWF-China’s Yangtze program.

With its long supply chains, outdated technology, poor wastewater treatment facilities, and, most important, low profit margins (Weile’s is just 5%), the industry is ripe for transformation.

In addition to facilitating individual efforts, WWF, the Chinese government, and the textile industry are working collectively to improve environmental standards and governance.

The Weile factory is an utterly industrial site—concrete floors, 40-foot towers of white cloth, and the thundering sound of machinery. Yet, the space is surreally odorless and smokeless. The company collaborates with local government to upgrade technology for cleaner production and lower costs.

“Farmers fish from the river behind our factory"— says Song Lingyong with pride—"because it’s so clean.”